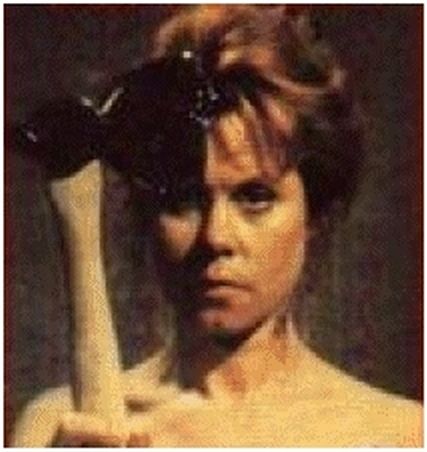 HBO and Tom Hanks’ Playtone productions are undertaking a new 4-hour mini-series retelling of the infamous legend of “Lizzie Borden” starring Chloë Sevigny. (In order to prepare for the role, Sevigny’s reportedly been staying at the Lizzie Borden Bed & Breakfast.)

Of course, I had viewed the original tv movie starring a haunting Elizabeth Montgomery – The Legend of Lizzie Borden. (A friend sent me a dvd copy.)  It first premiered on ABC February 10, 1975. This version was masterfully crafted, and one that inspires me to look deeper someday into this mysterious unsolved macabre murder scene. As a well-known psychic profiler, I must say this case intrigues me more than most. I would love one day soon to film in Fall River, documenting my personal thoughts on this historical crime scene, and what may have really happened there. The Lizzie Borden Bed & Breakfast has graciously extended me their standing personal invitation to visit.

In fact, “Haunting Evidence” was looking at Lizzie Borden as a possible episode for our Season 3, but the execs @ truTV felt it was a story that had been a bit overdone by other networks, so they passed.

Freaky side note: My mother happens to have an uncanny resemblance to actress Elizabeth Montgomery in facial features, mannerisms, gestures.

Lizzie Andrew Borden (July 19, 1860 – June 1, 1927) was a New England spinster who was the central figure in the hatchet murders of her father and stepmother on August 4, 1892, in Fall River, Massachusetts, in the United States. Although Lizzie Borden was acquitted, no one else was ever arrested or tried, and she has remained a notorious figure in American folklore. Dispute over the identity of the killer or killers continues to this day.

Do I feel Lizzie Borden is guilty of these gruesome blood-filled axe murders? Could she have been suffering from an epileptic seizure of the temporal lobe during her menstrual cycle?  (It is indeed, reported that on August 4, 1892, she was having her period.)

My psychic senses point to “Yes.”

And gave her mother forty whacks

When she saw what she had done

She gave her father forty-one.

*After Montgomery’s hit television series, Bewitched, ended, the beautiful and talented actress took the lead role as an accused axe murderess in The Legend of Lizzie Borden. Genealogical research has revealed that Elizabeth Montgomery and Lizzie Borden were sixth cousins once removed, both descending from 17th-century Massachusetts resident John Luther. As Rhonda McClure, the genealogist who documented the Montgomery-Borden connection, said, “I wonder how Elizabeth would have felt if she knew she was playing her own cousin.”